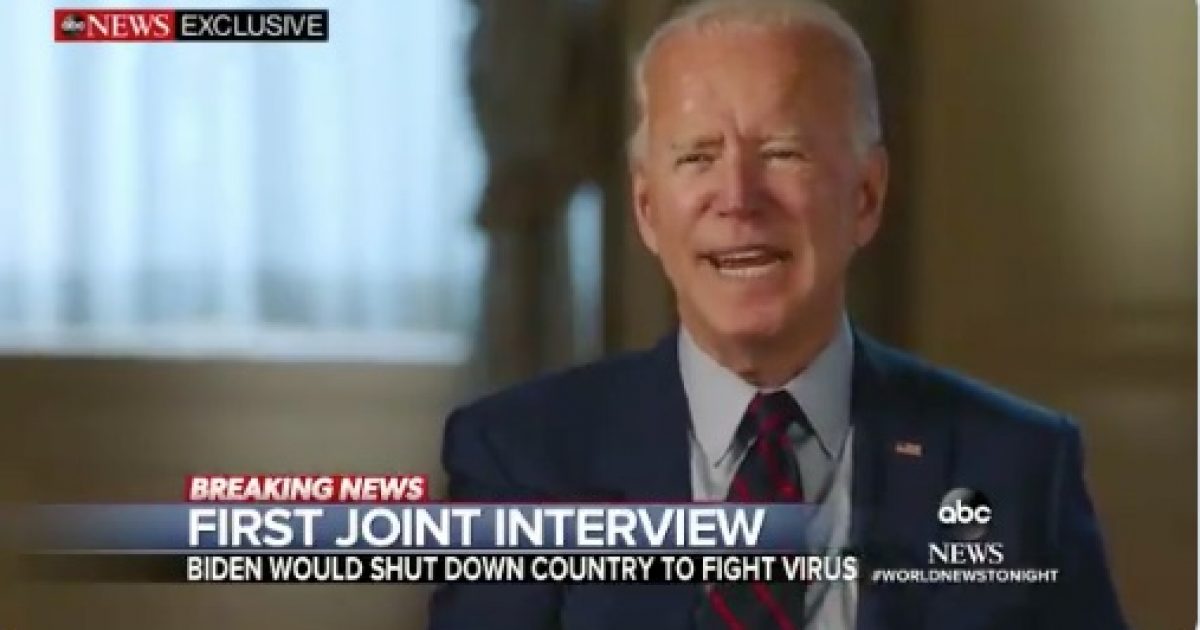 Democrat presidential candidate and former Vice President Joe Biden emphatically stated he would issue a national shutdown of the U.S. economy to address the China virus.

Biden made the statement in response to a hypothetical question about dealing with the pandemic during an exclusive interview on ABC News.

It was Biden’s first interview following the Democratic National Convention.

“I would shut it down; I would listen to the scientists,” @JoeBiden told @davidmuir Friday of the country, to stop the spread of COVID-19, in his first joint interview alongside his running mate, @KamalaHarris.

Republican National Committee Chairwoman Ronna McDaniel jumped on Biden’s urging of a national mandate to lock down the economy.

It is truly elitist for Joe Biden to threaten to shut the entire country down.

That may be easy for Hollywood celebrities and privileged politicians, but millions of Americans need to go to work and live their lives.

We can balance that reality with health and safety. pic.twitter.com/e9ugS0GfKC

Biden is no stranger to expressing national mandates to deal with the pandemic.

Biden is absolutely serious about a national mask mandate.

The former vice president repeated his interest in the mask mandate during his acceptance speech at the DNC.

Joe Biden promises rapid COVID-19 tests and a national mandate to wear a mask as a 'patriotic duty' in his #DemConvention speech. More coverage: https://t.co/VczLCX35A9 pic.twitter.com/35vIVvObhA

Clearly, Biden and his team want to use the China virus as a key part of their national campaign.

However, in doing so Biden is exposing his interest in a command and control approach to COVID-19 including a national shutdown and a nationwide mask mandate where every American in every state will be treated the same.

Biden’s strategy is a warning to all Americans that he wants to treat all Americans the same and will not hesitate to use the power of the Executive Branch to restrict liberty.

Democrats, including Biden, continually focus on strategies without regard to the consequences of their actions.