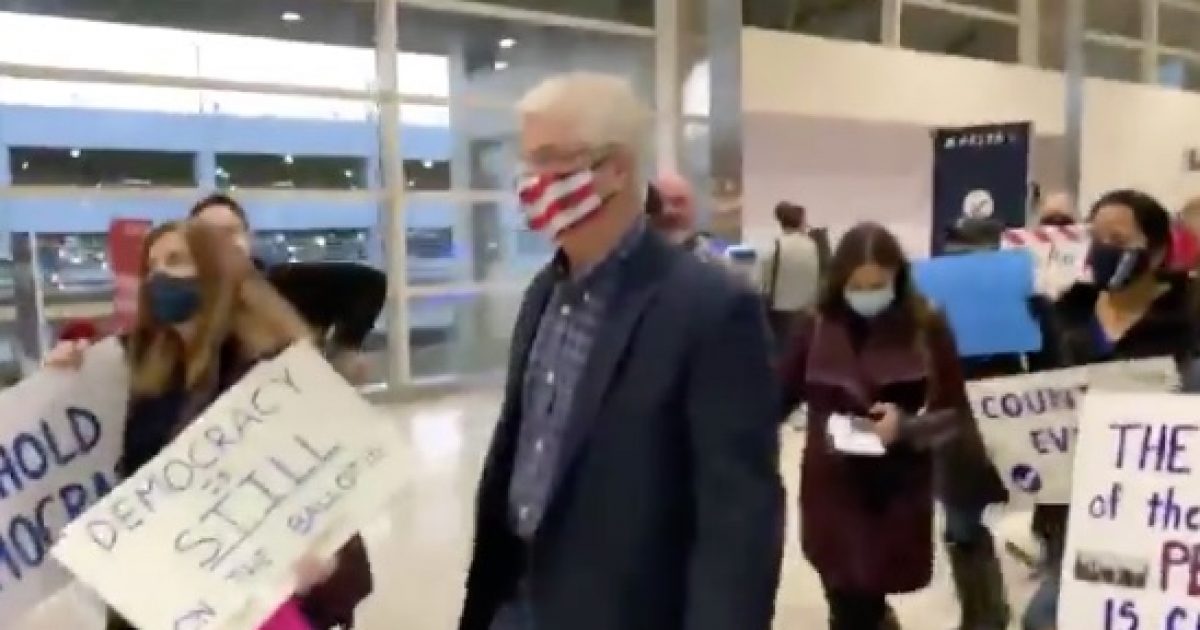 The angry liberal mob is taking matters into their own hands over the pending election results in Michigan and their radical tactics include harassing and intimidating Republicans involved in the process.

Michigan Republican Senate Majority Leader Mike Shirkey was harassed at the Detroit Metropolitan Wayne County Airport on Friday while heading to a meeting at the White House.

Michigan GOP Senate Majority Leader Mike Shirkey was caught by activists at the airport this morning after he was invited to the White House by Trump pic.twitter.com/8cwc4JkYdd

#BREAKING On his way to Washington to talk to @realDonaldTrump @SenMikeShirkey says he is “ happy to meet with the president” – but did not give specifics. @WWJ950 @FOX2News #ElectionResults2020 pic.twitter.com/TW0mH5Ttks

Other Michigan county Republican officials were targeted this week over their refusal to certify the election results because of irregularities.

Monica Palmer, chairwoman for the Wayne County Board of Canvassers, said her personal information was made public and that she and her family, including her daughter, were threatened.

Palmer earlier told the Free Press her family had “received multiple threats.” “The threats have been made against myself, my daughter and my husband,” she said. “Reports have been filed with Grosse Pointe Woods police and the FBI.”

Palmer, along with Wayne County Board of Canvassers member William Hartmann, were called racists.

It’s plain and simple, folks. The Republican members of the Wayne County Board of Canvassers put politics above their duty to our residents. Suggesting that all of Wayne County can be certified, EXCEPT for Detroit, is horrifying racist and a subversion of our democracy.

Last night the Wayne County Board of Canvassers refused to certify the election results, citing irregularities (which are documented in 234 pages of affidavits)

Then came the typical barrage of leftist threats & cries of racism from the Squad, the failed Governor, and others…⬇️ https://t.co/Qfxlb9gvEK

Intimidation is not the way to deal with policy debates in America.

The liberal mob’s thuggish behavior is outrageous and must be condemned.