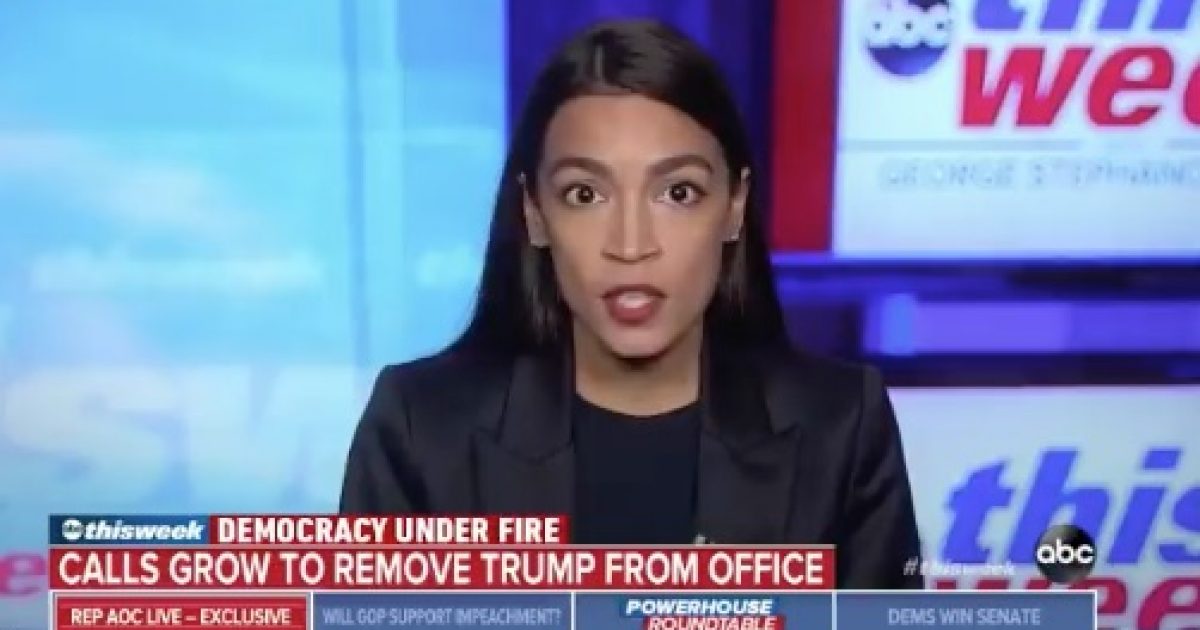 On ABC News’ “This Week,” Representative Alexandria Ocasio-Cortez (D-NY) pushed hard for the impeachment of President Trump for a second time.

The basis of her beliefs is rooted in the riot at the Capitol following the “Stop the Steal” rally, which she called an “insurrection against the United States,” that was initiated by the president.

Ocasio-Cortez believes President Trump must be removed as soon as possible because he “represents a clear and present danger.”

She also added impeaching President Trump would block him from “running for office ever again,” and to stop him from “pardoning himself.”

Rep. Alexandria Ocasio-Cortez backs impeachment, telling @GStephanopoulos “every minute" that Trump is "in office represents a clear and present danger.”

Ocasio-Cortez rejected the idea of not impeaching the president a second time because it would work against unifying the country.

Rep. Ocasio-Cortez pushes back against some GOP lawmakers suggesting a second impeachment of Pres. Trump would threaten unity: "The process of healing is separate and in fact requires accountability… because without it, it will happen again." https://t.co/wbex0bS4Sb pic.twitter.com/6QcDczitua

Ocasio-Cortez’s view of removing the president is shared by Democrats and some Republicans.

Chris Christie tells @GStephanopoulos Trump’s incitement of Capitol siege is an impeachable offense: “If inciting to insurrection isn’t, then I don’t really know what is.” https://t.co/FnD9YSf2TE pic.twitter.com/rONPP8C0x3

Illinois Republican Representative Adam Kinzinger also urged for the president to leave office via the 25th Amendment or resignation.

NEW: GOP Rep. Adam Kinzinger tells @gstephanopoulos "the best thing for the country" is for Pres. Trump to resign, adding "the next best thing is the 25th Amendment."

"We have to be willing to give our careers to do the right thing." https://t.co/OrkLsXeQjx pic.twitter.com/zoVHpcwNeh

It looks like impeachment is high on the Democrat agenda Monday.

This president must be impeached in order to preserve and protect our democracy.

The prospect of impeaching President Trump is not certain.

According to Politico, it’s very difficult to impeach and remove the president from office with only 11 days or so left in his term.

Still, if Democrats did move to impeach, the effort isn’t expected to result in Trump’s ouster with just 11 days left in his term. The Senate likely wouldn’t even begin Trump’s impeachment trial until after Biden’s inauguration on Jan. 20. Even then, it’s not clear if any Senate Republicans would join with Democrats to convict Trump.

On the surface, Democrats appear to want President Trump impeached because they feel he caused the riot at the Capitol but the real reason is fear.

Not fear that the president is dangerous as Ocasio-Cortez said but the real fear is President Trump will run again for president in 2024.

The truth is President Trump represents a clear and present danger to the Democrat political agenda.