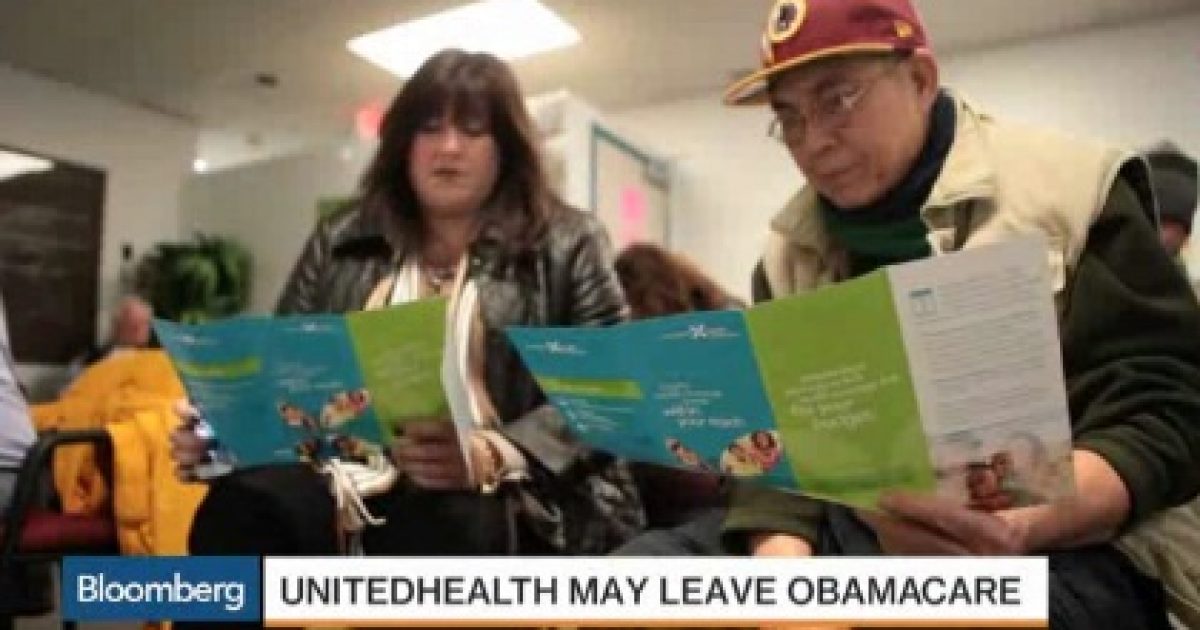 In a shocking 180-degree turn, a once enthusiastic UnitedHealth Group is now reconsidering its participation in ObamaCare’s exchanges. Since UnitedHealth Group is one of the largest insurers in the country (they enrolled about 550,000 Americans into the exchanges), this would have serious impacts on the success (or rather, the failure) of the president’s signature health care law.

UnitedHealth Group, the nation’s largest health insurer, is suddenly having second thoughts about Obamacare after it reported massive losses from the law’s new insurance marketplaces.

The company cut 2016 earnings projections today after it reported projected losses of $275 million on plans sold through the Affordable Care Act exchanges. The insurer said it’s cutting back on marketing for its exchange plans during the current enrollment period and is reevaluating its participation in the fledgling marketplaces for 2017.

…”In recent weeks, growth expectations for individual exchange participation have tempered industrywide, co-operatives have failed and market data has signaled higher risks and more difficulties while our own claims experience has deteriorated, so we are taking this proactive step,” said UnitedHealth CEO Stephen Hemsley, in a statement.

Imagine that. Increased costs and decreased earnings from a program that is trying to recruit young and healthy Americans to overpay for health care in order to offset the costs of the older and sicker. What could have possibly gone wrong?

In a conference call with investors, Hemsley offered a sober assessment of the exchanges’ future viability. He said that claims data have been getting worse as time has gone on, and there’s no evidence pointing toward improvement.

Asked about whether the company could sustain losses past 2016, he was blunt: “No. We cannot sustain these losses. We can’t really subsidize a marketplace that doesn’t appear at the moment to be sustaining itself.”

So the question is, if UnitedHealth Group backs out of the exchanges, what happens next? Turn out, there is a serious storm brewing, and it’s forecasted to hit right after the 2016 presidential election.

The year 2017 is significant for insurers, because that’s the year when several programs designed to mitigate risk for insurers through federal backstops go away. The hope was that those programs would act as training wheels for Obamacare in its first few years of implementation, but after that, the insurers were supposed to be able to thrive on their own. UnitedHealth’s statement suggests otherwise.

If UnitedHealth and other insurers decide to exit, remaining insurers will be forced to take on even more high-risk enrollees, prompting them to either raise rates further or exit themselves. That in turn would deprive individuals of choices and remove competition, a key purpose of the exchanges.

This isn’t just a logistical headache. It’s infuriating. President Obama forced the health care law down America’s throat as part of an ideological thought experiment, never actually thinking about all the health care plans that would be uprooted because of his micromanaging.

Ultimately, that’s the problem with central planners. They are too arrogant to consider that maybe, just maybe, they don’t have the knowledge or the skills necessary to account for all the consequences and unintended consequences of tinkering with entire major industries.