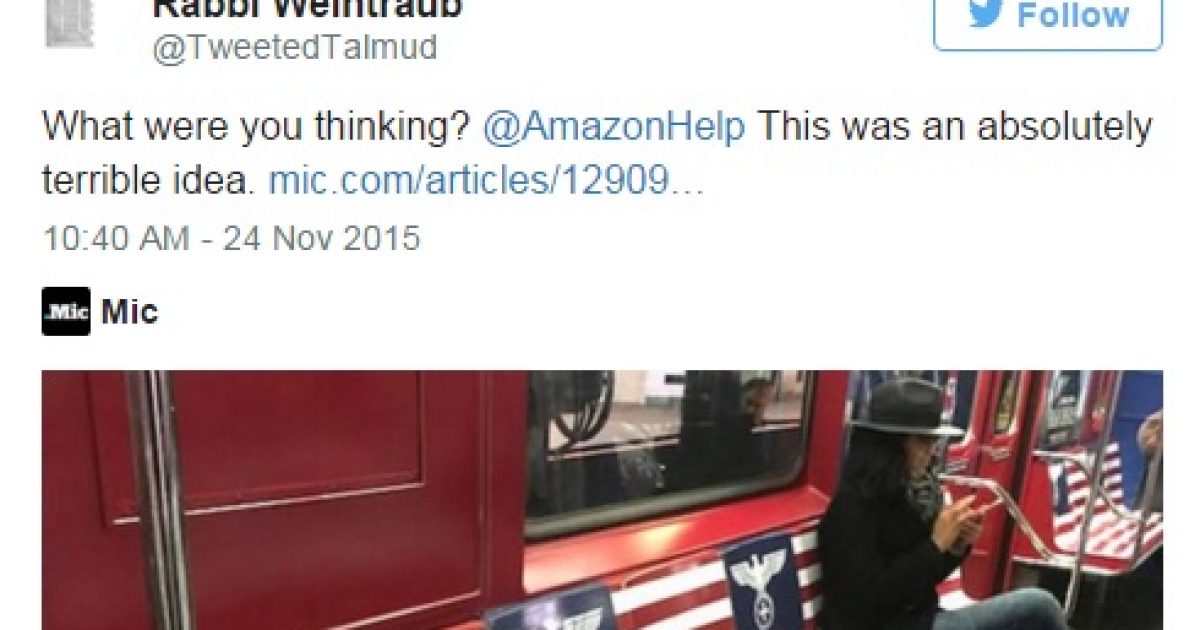 Yikes. Amazon’s latest ad campaign to promote their new series, “The Man in the High Castle” has been pulled. After taking a look at the New York subway, it’s not difficult to see why.

The 42nd Street Shuttle, which runs between the tourist destination Times Square and the transit hub Grand Central Terminal, currently features an alternative version of the American flag that includes Nazi symbolism. Amazon’s series imagines a world where the Nazis won World War II and have taken control over parts of the United States. The series is based off of the novel by the same name by Philip K. Dick. To promote the show, the network covered half a subway with flags that feature a strong resemblance to the Reichsadler, a Nazi coat of arm.

… The Anti-Defamation League’s New York Regional Director Evan Bernstein labeled the ads insensitive. “Our concern is that the Nazi imagery that is being used as part of this ad campaign comes without any context,” he said in a statement to FOX411. “On the television program, which explains this is the notion of an America controlled by Hitler, you get that context. On the train, seeing the American flag paired with a Nazi symbol is viscerally offensive because there is no context as to what it means. The fact that the flag is spread across the seats only compounds the effect.”

While Amazon should have the right to promote their programs however they want, I gotta say, these ads are in poor taste. The pictures are pretty mortifying.

What do you think? Let us know in the comments below!

42nd St shuttle to #TimesSquare covered in Nazi Germany and Imperial Japan symbols for @amazon ad. Is this ok? pic.twitter.com/ysJ3m0UIPT

One boy overheard Saying "these trains are cool!" While sitting on the seats, not knowing what they symbolize pic.twitter.com/Mw2k4RF1v3