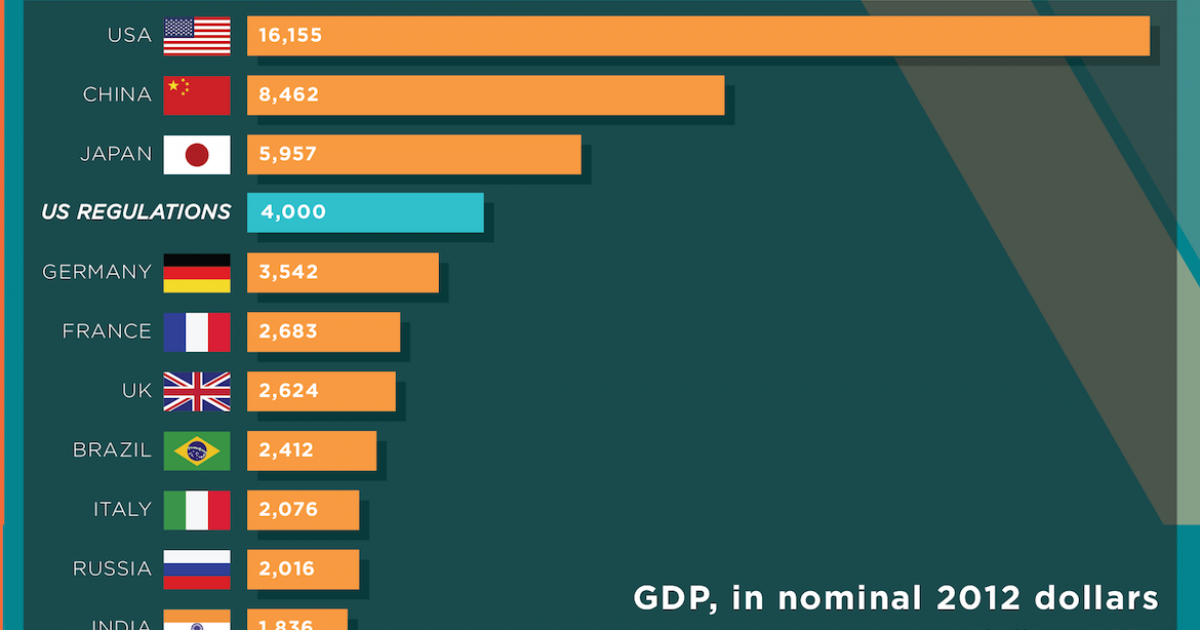 The U.S. government regulates businesses so heavily, the costs of the regulations alone are bigger than the economies of every country in the world, except for Japan and China. That’s just depressing.

The cost of U.S. regulations is now larger than Germany’s economy, amounting to a $4 trillion loss to the American economy, according to a new study by the Mercatus Center at George Mason University. The study, released Tuesday, found that regulations over the past several decades amount to a loss of $13,000 for each American worker.

“The impact of regulation on economic growth has been widely studied, but most research has focused on a narrow set of regulations, industries, or both,” according to the report. “These studies typically rely on regulatory indexes that measure subsets of all regulation, on country-to-country comparisons, on short time spans, or on surveys in which experts report how regulated they believe their country or industry is.

… The cost of federal regulations amounts to the fourth-largest GDP in the world, surpassing the economies of Germany, France, the United Kingdom, Brazil, Italy, Russia, and India.

The Mercatus Center put together a startling graphic demonstrating the true cost of over-regulation:

Regulations don’t occur in a vacuum. Their costs leave immediate bruises on the economy in the form of lost jobs and increased costs for small businesses. In the long term, over-regulation leads to stalled economic growth and lost opportunities for innovation and progress.

Actions have consequences, intended and unintended. Progressives need to realize the more they micromanage the economy, the more individuals and families are going to get hurt in the collateral damage.