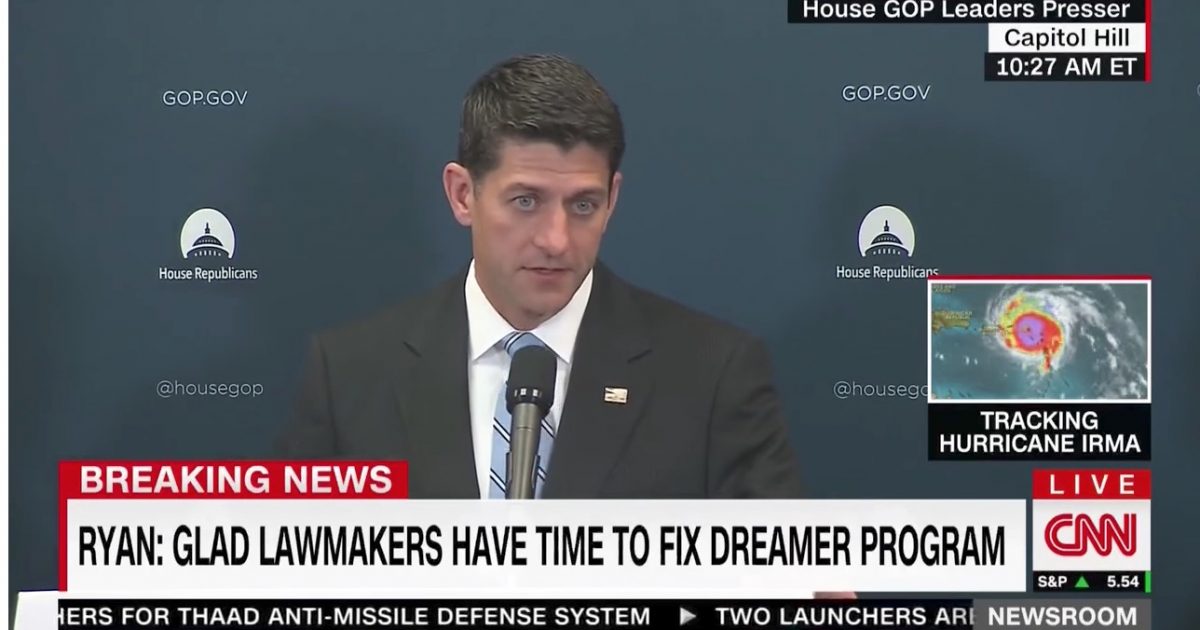 Republicans were shocked at a short-term budget and debt ceiling deal struck between President Trump and the Democrats.

The agreement also provides funding for the devastating consequences of Hurricane Harvey.

During an Oval Office meeting Wednesday, Trump accepted a proposal by Senate Minority Leader Chuck Schumer and his House counterpart, Nancy Pelosi, to tie a three-month suspension of the debt limit to a Hurricane Harvey relief measure — and throw in a stopgap continuing resolution to fund the government into December.

The Trump move blindsided House Speaker Paul Ryan (R-WI) who had previously blasted the Democrat’s demands regarding the debt ceiling.

“I think that’s a ridiculous idea. I hope they don’t mean that,” Ryan said in response to a reporter’s question about Democrats seeking to extract concessions. “Let’s just think about this. We’ve got all this devastation in Texas. We’ve got another unprecedented hurricane about to hit Florida, and they want to play politics with the debt ceiling?”

Ryan is also facing pressure from conservative representatives and it’s being reported that former White House adviser Steve Bannon met with the Freedom Caucus head to discuss a replacement for Ryan.

Leaders of the Freedom Caucus met with House Speaker Paul D. Ryan (R-Wis.) on Wednesday to candidly express their frustrations with his leadership and his handling of the Republican legislative agenda, according to two people familiar with the discussion.

The exchange comes as former White House chief strategist Stephen K. Bannon is having conversations with hard-line GOP lawmakers about how they should exert greater influence in the fall’s political fights and pressure congressional Republican leaders.

Several people close to Bannon and Meadows said on Wednesday that the two men, who met on Monday on Capitol Hill, have begun to discuss who could replace Ryan as speaker, should conservatives rebel against him. But they stressed that those discussions remain speculative and informal, with no plan yet for action.

Ryan is being pressed by both Trump and conservative members of the House.

The combined pressure will likely make Ryan press hard on tax reform in order to deliver an accomplishment.

The question is will even a successful tax reform law help Ryan keep his job. Time will tell.