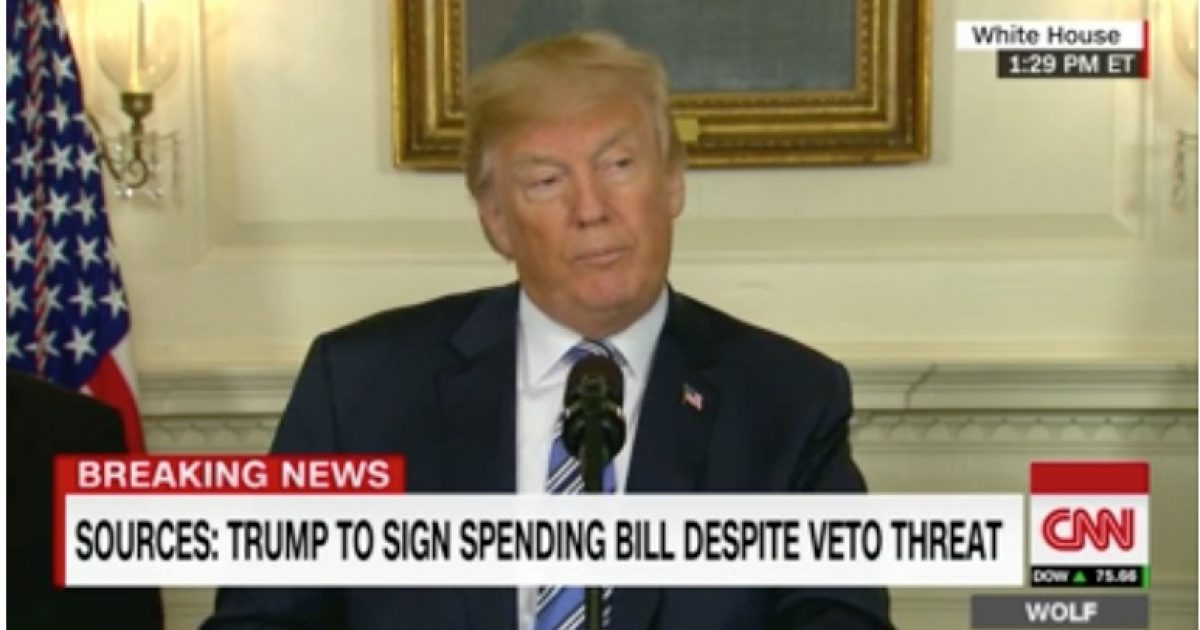 President Trump gave the left-wing media plenty of ammunition to embarrass him when he signed the massive $1.3 trillion spending bill.

NBC News’ analysis highlighted the failure of President Trump to get most of his priorities funded.

President Donald Trump lost — bigly — when Congress voted for a $1.3 trillion spending bill that repudiates many of his top policy goals and much of his rhetoric.

He didn’t get the money he wanted for a wall on the U.S. border with Mexico or a provision cutting off federal funds for “sanctuary cities.” Lawmakers not only ignored his fiscal 2018 budget’s elimination of scores of federal programs, they increased spending for many of those on his target list. And Congress provided seed cash for a New York-New Jersey tunnel project that Trump tried to kill.

CNN did not miss an opportunity to make fun of the president.

Cillizza selected 26 statements made by the president and he made snarky comments after each line.

Here is a sample:

2. “They get together and they create a series of documents that nobody has been able to read because it was just done.”

On my third re-reading of this line, I am now pretty convinced Trump is talking about the legislative process that produced the omnibus. Still, “a series of documents” is a super weird way to refer to it.

3. “For the last eight years, deep defense cuts have undermined our national security, hallowed our — and they just — if you look at what’s taken out, they’ve hallowed our readiness as a military unit.”

The official White House transcript says “hallowed.” And he said “hallowed.” But, he had to mean “hollowed,” right? RIGHT?

The spending bill will be used by the left-wing media and Democrats to slam President Trump on policy matters going forward.

As the midterm elections approach, expect to see political ads highlighting the failure of President Trump to get his policy agenda funded, especially the border wall between the U.S. and Mexico.

The political consequences of the $1.3 trillion federal government spending package will be very damaging to the Republican effort to keep control of Congress.