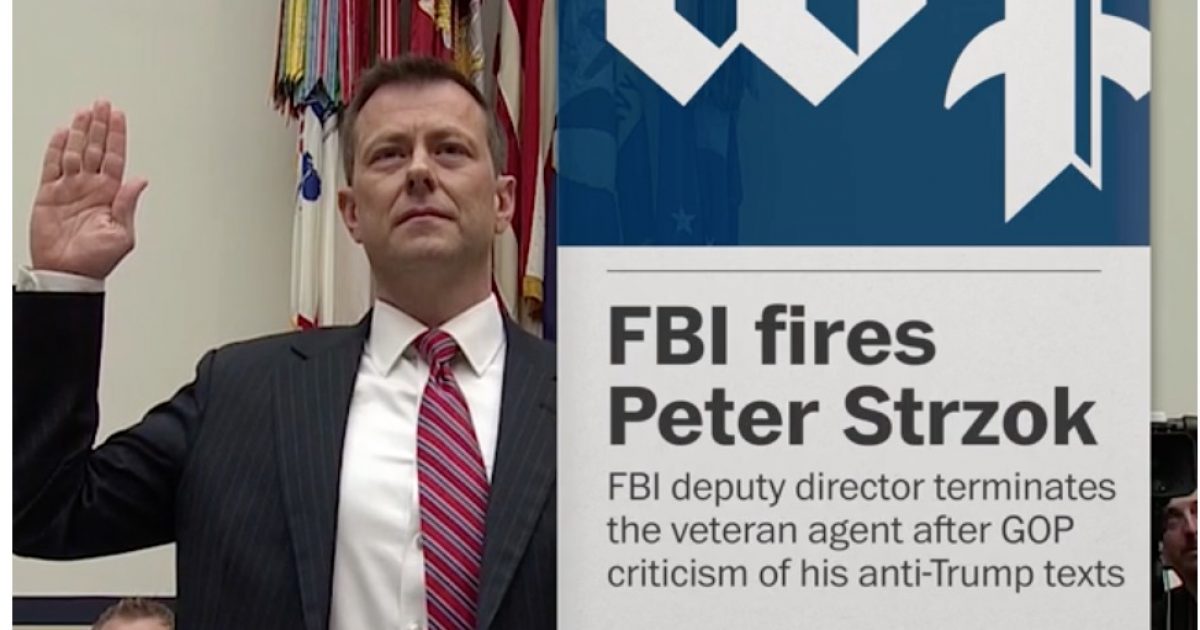 The FBI fired Peter Strzok from the bureau.

Strzok played a key role in the investigation of Hillary Clinton’s use of a home-based personal email server and the FBI investigation of Russia’s interference in the 2016 presidential election.

Strzok was also part of Special Counsel Robert Mueller’s investigative team but he was removed from that role when it was discovered he exchanged anti-Trump text messages with former FBI lawyer Lisa Page.

The FBI has fired agent Peter Strzok, who helped lead the bureau’s investigation into Russian interference in the 2016 election until officials discovered he had been sending anti-Trump texts.

Aitan Goelman, Strzok’s lawyer, said FBI Deputy Director David L. Bowdich ordered the firing on Friday — even though the director of the FBI office that normally handles employee discipline had decided Strzok should face only a demotion and 60-day suspension. Goelman said the move undercuts the FBI’s repeated assurances that Strzok would be afforded the normal disciplinary process.

“This isn’t the normal process in any way more than name,” Goelman said, adding in a statement, “This decision should be deeply troubling to all Americans.”

The Department of Justice inspector general discovered the anti-Trump text messages and a report by the internal investigative group expressed a concern that Strzok did not aggressively investigate Hillary Clinton’s State Department emails on Anthony Weiner’s computer. Weiner’s wife, Human Abedin, was Clinton’s key aide at the State Department.

At the time, Mr. Strzok was in the early stages of investigating whether any Trump associates had conspired with Russia’s interference in the presidential election, and nearly a month passed before agents and analysts began to act on the emails found on Mr. Weiner’s laptop. Mr. Horowitz could not rule out that Mr. Strzok had slow-walked the examination of the new emails to help Mrs. Clinton’s presidential bid.

“Under these circumstances, we did not have confidence that Strzok’s decision to prioritize the Russia investigation over following up on the Midyear-related investigative lead discovered on the Weiner laptop was free from bias,” he wrote.

Given Strzok’s biased political views, it is not surprising he was fired.

What is surprising is that it took the FBI so long to take the proper action.