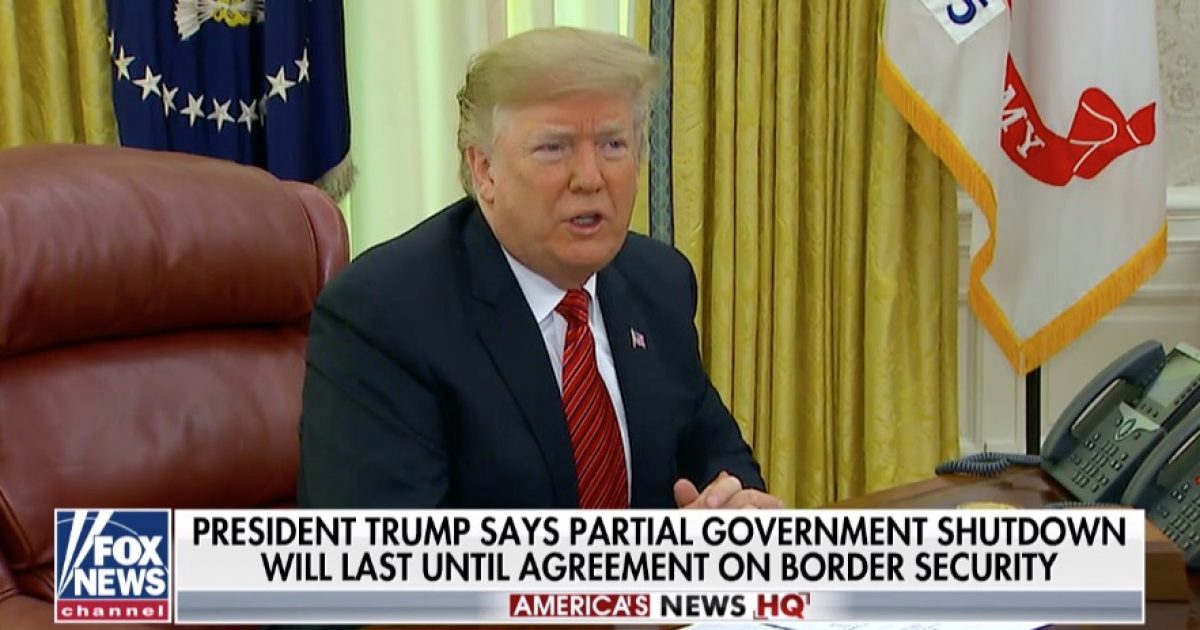 President Trump is holding firm on his stance to secure funding for the border wall.

President Trump has a Christmas message for Democrats – the government is going to remain partially shut down “until we have a wall [or] fence.”

Trump, speaking to reporters Tuesday in the Oval Office during the fourth day of the impasse, also revealed that he will be going to the border in Texas for a “groundbreaking” ceremony for a portion of the project at the end of January.

“While we’re fighting over funding, we’re also building, and it’s my hope to have this done, completed, all 500 to 550 miles, to have it either renovated or brand new by Election Day,” he said.

Trump also used Twitter to focus blame on the Democrats:

I am all alone (poor me) in the White House waiting for the Democrats to come back and make a deal on desperately needed Border Security. At some point the Democrats not wanting to make a deal will cost our Country more money than the Border Wall we are all talking about. Crazy!

House Democratic Leader Nancy Pelosi accused President Donald Trump of using “scare tactics” to build support for his proposed U.S.-Mexican border wall, which she joked had been reduced from a giant, cement structure “to, I think, a beaded curtain.”

“He talked about terrorists coming in over that particular border, which wasn’t so. He talked about people bringing in diseases and all the rest of that, which wasn’t so,” said Pelosi, D-Calif., who is likely to become speaker after Democrats take over the House of Representatives next month. “He’s using scare tactics that are not evidence-based, and it’s wrong.”

To date, the partial government shutdown has not influenced either political party.

The Department of Homeland Security described the importance of border walls in stopping the flow of drugs and people into the U.S.

The Bottom Line: Walls Work. When it comes to stopping drugs and illegal aliens from crossing our borders, border walls have proven to be extremely effective. Border security relies on a combination of border infrastructure, technology, personnel and partnerships with law enforcement at the state, local, tribal, and federal level. For example, when we installed a border wall in the Yuma Sector, we have seen border apprehensions decrease by 90 percent. In San Diego, we saw on Sunday that dilapidated, decades-old barriers are not sufficient for today’s threat and need to be removed so new – up to 30 foot wall sections can be completed.

Democrats are playing politics with security for the nation.

Pelosi and Senate Minority Leader Chuck Schumer (D-NY) wants to deny President Trump from delivering his pledge to building the wall because it was one of his major campaign promises.