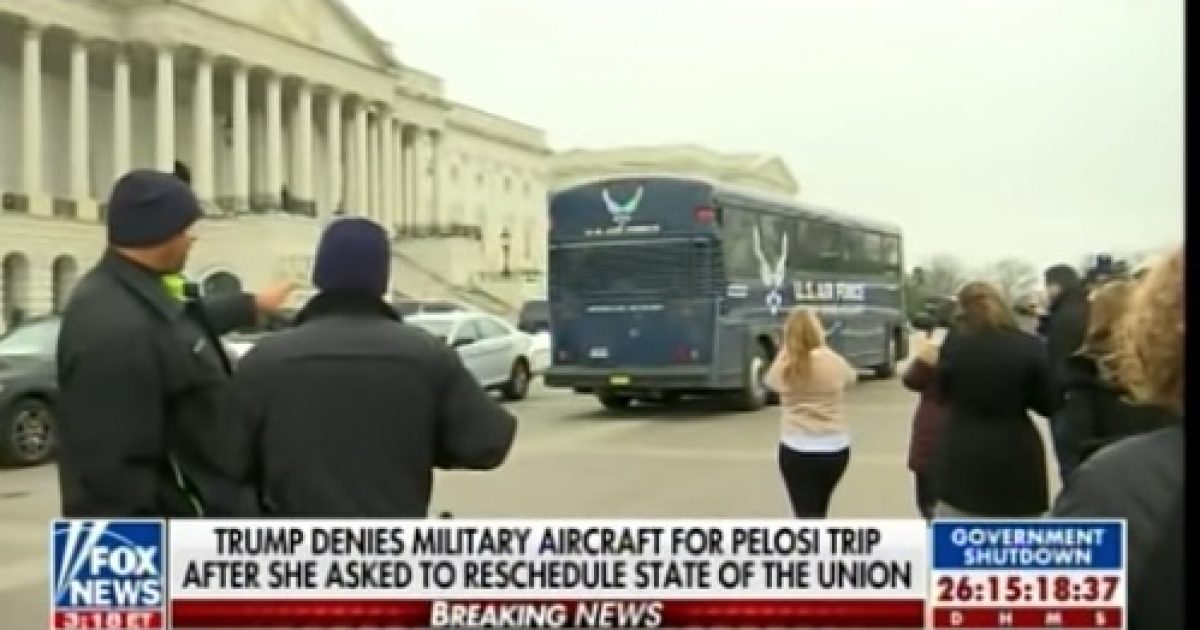 President Trump spiked Democrat Speaker of the House Nancy Pelosi’s foreign trip, denying her the use of military aircraft.

Pelosi, along with other lawmakers, were scheduled to take off not long before President Trump canceled the trip.

In a letter to Pelosi, the president stated he felt it would be best if Pelosi, “were in Washington negotiating with me.”

In a curt letter, Trump said her trip has been “postponed.”

“Due to the Shutdown, I am sorry to inform you that your trip to Brussels, Egypt, and Afghanistan has been postponed. We will reschedule this seven-day excursion when the Shutdown is over. In light of the 800,000 great American workers not receiving pay, I am sure you would agree that postponing this public relations event is totally appropriate,” Trump wrote.

“I also feel that, during this period, it would be better if you were in Washington negotiating with me and joining the Strong Border Security movement to end the Shutdown. Obviously, if you would like to make your journey by flying commercial, that would certainly be your prerogative.”

Pelosi spokesman Drew Hammill responded in a series of Tweets:

The CODEL to Afghanistan included a required stop in Brussels for pilot rest. In Brussels, the delegation was scheduled to meet with top NATO commanders, U.S. military leaders and key allies–to affirm the United States’ ironclad commitment to the NATO alliance. (1/4)

This weekend visit to Afghanistan did not include a stop in Egypt. (2/4)

The purpose of the trip was to express appreciation & thanks to our men & women in uniform for their service & dedication, & to obtain critical national security & intelligence briefings from those on the front lines. (3/4)

The canceled trip follows Pelosi’s request to President Trump to postpone the upcoming State of the Union Address due to the government shutdown.

“The date of the State of the Union is not a sacred date. It’s not constitutionally required. It’s not the president’s birthday. It’s just a date we agreed to,” Pelosi told reporters during a press conference on Capitol Hill Thursday. “That’s why I said to the president, if you don’t open up government, let’s discuss a mutually agreeable date.”

She added: “It could be a week later—if the government is reopened.”

For more than 24 hours, Trump did not respond to Pelosi’s request, even as fellow Republicans condemned her push for delay.

When asked for additional context about the congressional delegation and the apparent trip delay, White House Press Secretary Sarah Sanders reiterated that Pelosi could fly commercial: “The Department of Defense has to approve military air travel. As he made clear in the letter she can still go, she just has to travel commercial.”