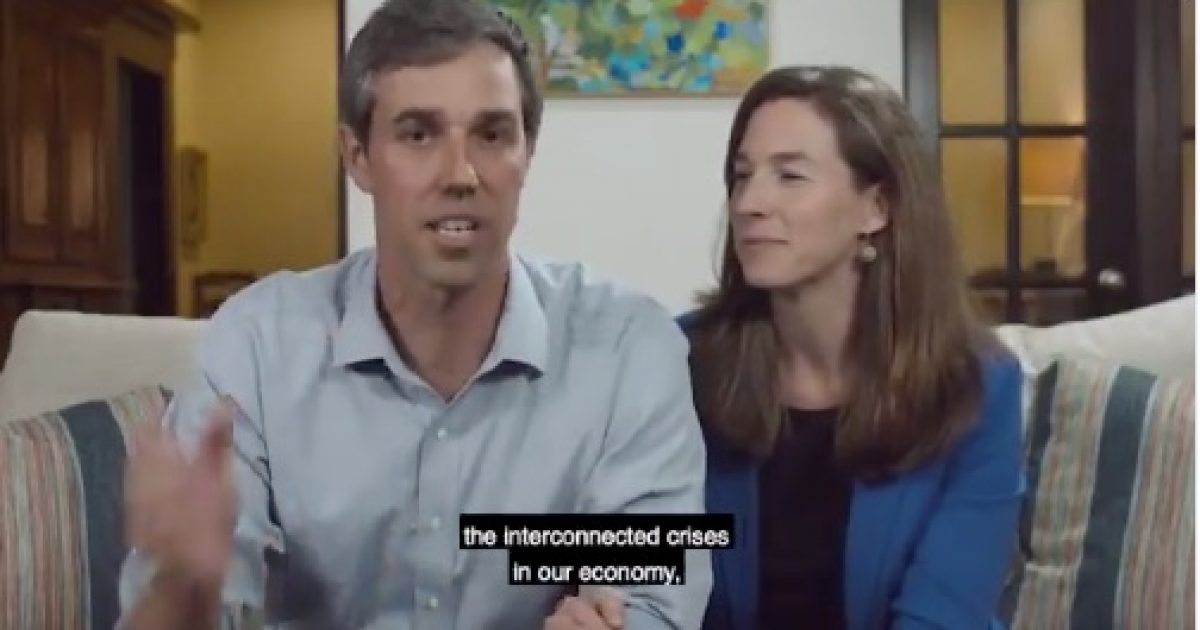 O’Rourke, the latest presidential hopeful, made the announcement in a video with his wife sitting at his side:

I am running to serve you as the next president. The challenges we face are the greatest in living memory. No one person can meet them on their own. Only this country can do that, and only if we build a movement that includes all of us. Say you're in: https://t.co/EKLdkVET2u pic.twitter.com/lainXyvG2n

During his announcement, O’Rouke mentioned immigration and climate change as key issues and he made a positive call for unity, saying, “This is going to be a positive campaign that seeks to bring out the very best from every single one of us, that seeks to unite a very divided country. We saw the power of this in Texas.”

O’Rourke joins a growing list of Democrats that are seeking to replace President Trump.

Like many of his Democrat competitors, O’Rourke is trying to get media coverage by making extreme statements.

Regarding climate change, for example, O’Rourke said urgent action is needed to tackle the problem and he added it demands leadership similar to that of the soldiers that stormed “the beaches in Normandy” in France in 1944.

O’Rourke said, “If you think about our leadership, those who proceeded us, right. Those who were on the beaches in Normandy, those who faced an existential threat to Western democracy and our way of life, they showed us the way.”

To O’Rourke, climate change is as dangerous to the world as Nazi Germany.

O’Rourke generated a lot of excitement when he ran against Senator Ted Cruz in Texas in a 2018 Senate race. Even though he lost by a small margin, O’Rourke remains popular with the Democrat base.

In addition to having a huge network of potential political donors for his campaign, O’Rourke gets a lot of positive news coverage.

For example, Vanity Fair did a cover story on the former Texas representative.

“Man, I’m just born to be in it.” Beto O’Rourke seemed to come from nowhere to the brink of a presidential candidacy—but he’s been on this journey for his whole life. O’Rourke spoke with Joe Hagan. Photographs by Annie Leibovitz. https://t.co/WhmQGZnbUg pic.twitter.com/a7DCoaZdtd

In the article, O’Rourke proudly stated he is essentially destined to be a presidential candidate, stating, “Man, I’m just born to be in it.”

Given the money he can generate along with media support, it’s likely O’Rourke will be in the top tier of Democrat presidential candidates.