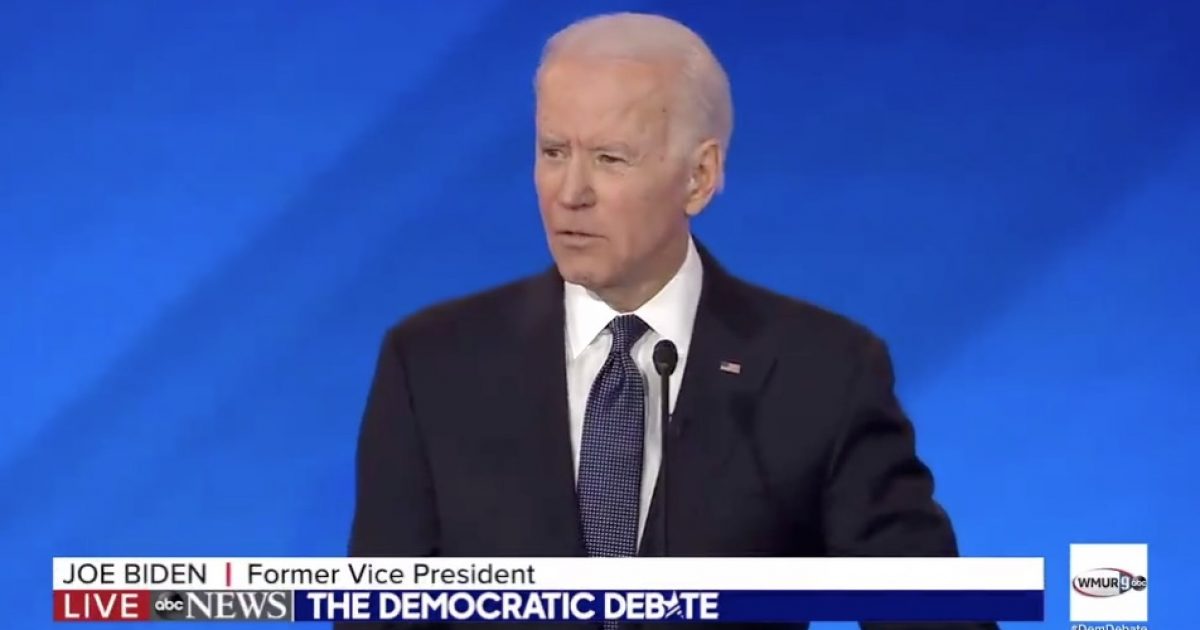 Coming off his big loss in the Iowa caucuses, Biden feels he is going to lose the New Hampshire primary on Tuesday night.

Biden spent a lot of time in Iowa while some of his competitors were trapped in Washington, D.C., at the Senate impeachment trial.

Former VP Biden on Iowa: "This is a long race. I took a hit in Iowa and I'll probably take a hit here." https://t.co/Y3LWCvEZfY pic.twitter.com/T7kWYYisdJ

Biden tried to boost his political viability by challenging Senator Bernie Sanders (I-VT) on the cost of the senator’s Medicare for All plan and by criticizing President Trump’s decision to move Lt. Col. Alexander Vindman from the White House.

Watch Biden’s comments on Medicare for All:

Joe Biden on Medicare for All: "Bernie says he wrote the damn thing—but he's unwilling to tell us what the damn thing is going to cost." https://t.co/Rhy9aOaDTU #DemDebate pic.twitter.com/dU6GXSkhjZ

Joe Biden: "Col. Vindman got thrown out of the White House today…[Pres. Trump] should have been pinning a medal on Vindman and not on Rush Limbaugh."

The anti-Trump media is openly discussing the challenges Democrats will have in regard to beating President Trump in November.

.@MarthaRaddatz: "Who do you think stood out in terms of going after Donald Trump?"@jonkarl: "I don't think there was anybody, based on tonight's performance, that has the Trump campaign quaking in their boots." https://t.co/C7vdsx9QuI #DemDebate pic.twitter.com/vzBupeQ8xD

Chris Matthews laying it down.

Socialism is an issue in this campaign.

He doesn’t like socialism and “it doesn’t frickin’ work!”

The New Hampshire primary is expected to be close.

. @SteveKornacki breaks down the latest poll results from New Hampshire and how that compares to polling in Nevada and South Carolina. #TrackingKornacki pic.twitter.com/2RbGagwsIV

Biden knows his campaign is in deep trouble but admitting defeat shows exceptionally poor judgment on his part.