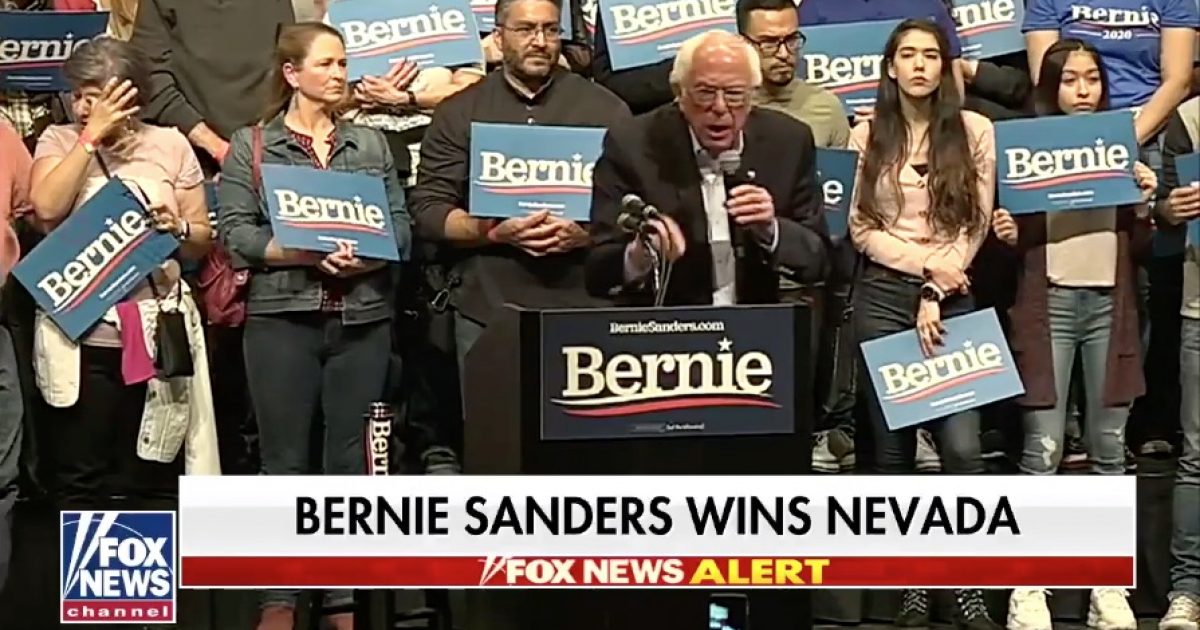 Democrats are in a panic over the rise of Senator Bernie Sanders (VT).

Sanders just scored a huge win in the Nevada caucus which followed his win in the New Hampshire primary and his second-place finish in the Iowa caucus.

The margin of victory for Sanders is large. With 60 percent of the results in, the Vermont Senator has a big lead in delegates – more than twice the amount that former Vice President Joe Biden is getting.

News organizations called the race before all the results were tabulated.

Former South Bend, Indiana, Mayor Pete Buttigieg, who is competing with Sanders to be the Democrat nominee for president, sounded the alarm about Sanders’ victory.

Buttigieg criticized Sanders for viewing capitalism as the “root of all evil” and warned that attitude goes “… beyond reform and reorder the economy in ways most Democrats — not to mention most Americans — don’t support.”

He also attacked Sanders over his health care plan.

Despite his losing record in Democrat contests, former Vice President Joe Biden was happy about coming in a distant second to Sanders.

The concern about Sanders’ lead in the race for the Democrat nomination goes beyond his competitors.

Representative James Clyburn (D-SC) is worried about the down-ticket consequence for Democrats if Sanders runs against President Trump.

“A lot of people think so,” Rep. Jim Clyburn tells @GStephanopoulos when asked if Sanders being the nominee could put the House majority in danger.

“I think that that would be a real burden for us in these states,” he says, pointing to "socialist" label. https://t.co/C8JeOODnLv pic.twitter.com/3KsbxXhFO4

MSNBC’s Chris Matthews likens Sanders victory in Nevada to Nazi Germany overrunning France in 1940: “It’s too late to stop him … it’s over” pic.twitter.com/6GJetLoDkq

"The entire theory that by expanding the electorate, increasing, turn out, so you can win the election is the equivalent of climate denial." Self identified political hack James Carville. https://t.co/UvmegVz99p pic.twitter.com/1SnbOAyEeU

The Sanders campaign jumped on his Nevada victory by releasing a video.

Sanders is gaining momentum and is in a good position to grab the Democrat nomination for president.

Democrats are panicking because they know Americans will reject Sanders’ radical policy ideas.