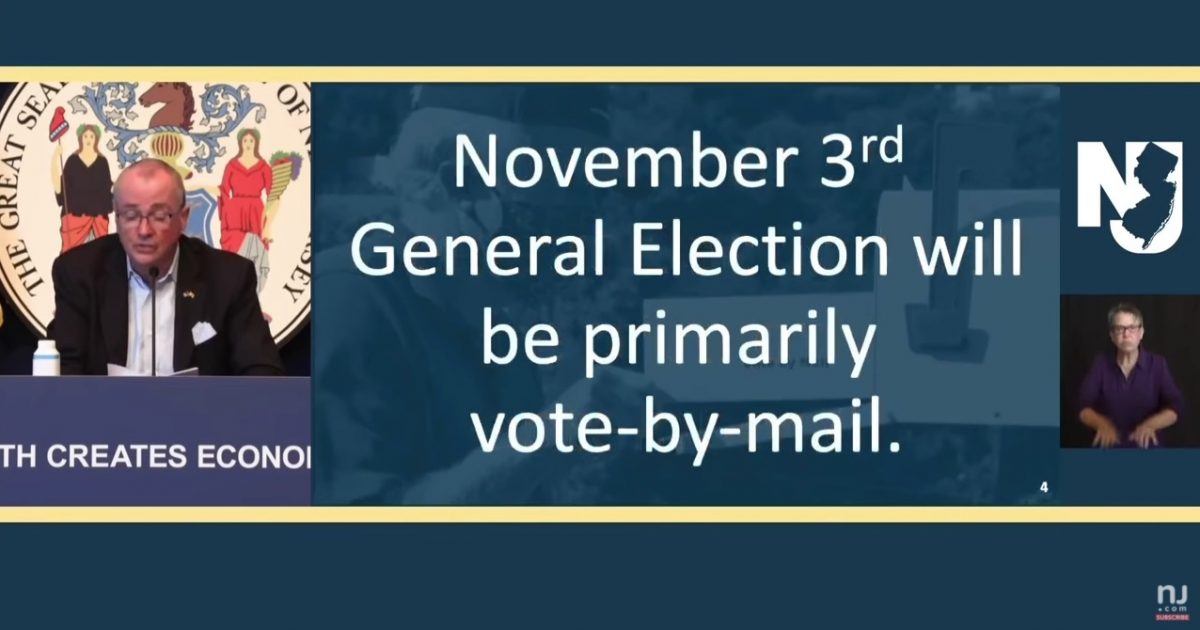 Under Murphy’s executive order all registered voters in New Jersey will get a ballot in the mail.

The decision by Murphy follows problems the state had with a special election in May where about 10 percent of the ballots were rejected.

An NJ Spotlight analysis of the vote-by-mail ballots cast in 31 municipalities that held nonpartisan municipal, school board or special elections on May 12 — an entirely mail-in election — found that election officials did not count 9.6% of ballots sent in.

In additon, some Republican voters got the wrong ballots, in fact, they got ballots for Democrats running for office not Republicans.

Most concerning, voter fraud issues in Patterson, New Jersey’s city council race resulted in the state’s attorney general filing charges against a councilman as well as a councilman-elect. Two other individuals were also charged.

The Board of Elections previously said about 800 votes would be set aside and not counted, amid charges they were found improperly bundled in mailboxes in Paterson as well as at a drop box in nearby Haledon.

NEW: The November 3rd Election will be primarily vote-by-mail.

No one should have to choose between their right to vote and their health. pic.twitter.com/P7KuzAx8G8

The health risk posed by the China Wuhan virus was the justification for Murphy’s executive order.

Beyond fraud concerns, there are significant questions about the ability of the U.S. Postal Service (USPS) to handle a huge influx of ballots.

In fact, USPS issued a warning about mail-in voting where it can’t guarantee delivery of ballots on a timely basis and if that occurred, a large number of voters will be disenfranchised.

Because of these concerns, President Trump is criticizing large scale mail-in voting schemes.

JUST NOW: "Everyone gets a ballot."@GovMurphy announced breaking plans to expand mail-in voting in NJ.@NewDaypic.twitter.com/vbsJT7TStr

Nevada is going to be sending all registered voters mail-in ballots, however, the state also had a problem with its recent primary.

Business Insider reports a large number of ballots were not delivered in Clark County, Nevada, where, “… the county mailed ballots to all of its 1.3 million registered voters in the Las Vegas area, but 223,000 were never delivered.”

Back in April, a Real Clear Politics commentary concluded that “Between 2012 and 2018, 28.3 million mail-in ballots remain unaccounted for, according to data from the federal Election Assistance Commission.”

The push by Democrats to have mail-in ballots on a massive scale is going to present a number of problems for the November election.

Voter registration rolls are notoriously outdated so there will likely be a large number of ballots circulating states which increases the odds for mischief.

The USPS’s inability to handle ballots will disenfranchise voters.

Finally, election results will be delayed if the elections are close and this is especially concerning for the presidential race.

In the end, the Democrat’s zeal for mail-in voting will result in chaos.