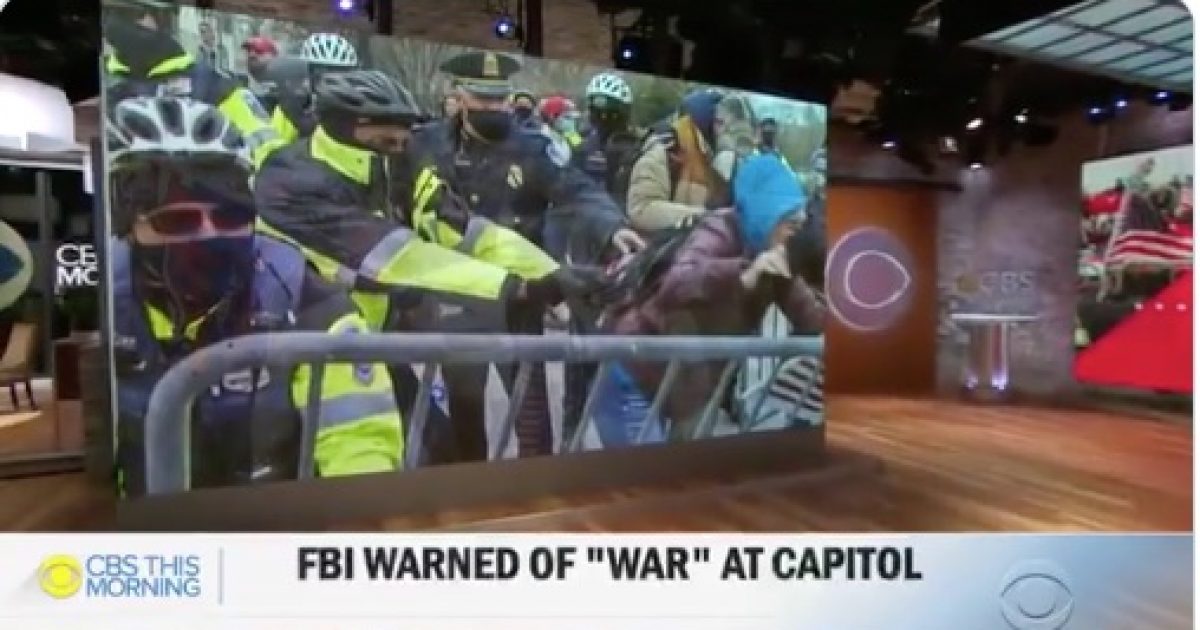 An FBI field office in Virginia collected and distributed evidence that extremists were planning an assault on the Capitol.

The warning was issued a day before the deadly riot but the concern raised by the FBI field office did not result in increased security at the Capitol.

The Washington Post reported on an internal document that revealed, “extremists were preparing to travel to Washington to commit violence and ‘war.'”

We're learning that law enforcement did receive a warning about last week's deadly attack on the Capitol.

The FBI now says a field office in Virginia warned of "war" at the Capitol the day before the riot.@jeffpeguescbs has more. pic.twitter.com/UtlidalUmN

According to NBC News, the FBI in Washington alerted local law enforcement about threats, including the field office report, but the current and former Capitol Police leadership deny seeing the intelligence information.

Following the riot at the Capitol, the FBI is aggressively pursuing and arresting individuals who appeared to have participated in the violence.

The #FBI is still seeking information to help identify individuals who actively instigated violence on January 6 in Washington, D.C. Visit https://t.co/h36NpdxbEh to see images from current cases, and if you see someone you recognize, submit a tip at https://t.co/buMd8vYXzH. pic.twitter.com/cGgWNeywIc

However, the late actions by the FBI on this incident and others over the years is being called out.

One can only imagine what it would be like if FBI had investigated other alleged crimes, including those within its own ranks, with the quickness and enthusiasm they're applying to the Capitol riots.
We might not have even had the riots.
https://t.co/FAlO7DJwSi

Now erring on the side of caution, the FBI is warning states of protests at their capitol buildings, including New York.

The FBI has warned of nationwide violent threats, and the State Capitol building in Albany has already taken precautions. https://t.co/T0pAKyitaj

Just the News interviewed former NYPD Commissioner Bernard Kerik on the intelligence leading up to the riot at the Capitol.

By all accounts, the FBI, NYPD and other authorities did exactly what they should have done by conducting interviews and making notifications to the Washington D.C. authorities,” Kerik said. “If these reports are true, you cannot incite a group that already pre-planned acts of violence by days or weeks, and it raises serious questions as to what security precautions were taken at the Capitol as a result.”

The deadly assault at the Capitol was an outrageous act that never should have happened.

However, if intelligence reports were acted upon by the law enforcement in Washington, D.C. the entire incident could have been avoided.

It’s inexcusable that the Capitol was not secure before such a big day, especially given the fact there were multiple warnings about extremist threats.