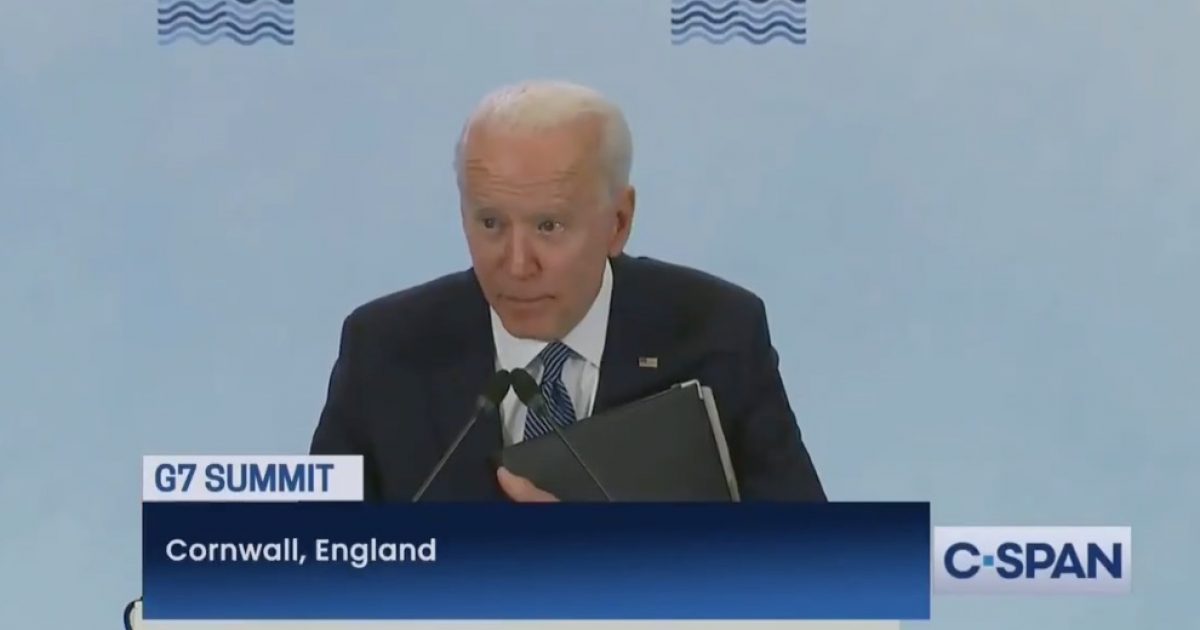 President Joe Biden showed the world how weak he really is when it comes to dealing with questions from the media.

Biden traveled overseas to attend summits and instead of engaging with the media, he kept the media at bay.

Here is Biden ignoring several questions shouted at him from the press followed by his staff rushing the media out of the room.

Biden tried to laugh through a question about Russian President Vladimir Putin which was then followed by an awkward long silent pause.

President @JoeBiden forgot what he was talking about multiple times while answering questions from reporters at the NATO Summit. pic.twitter.com/WgS2P9jpau

Biden also brushed off a question from a reporter. Not only did Biden cut the reporter off but he shot back saying, “120 days give me a break – need time,” and then left the press conference.

Man this is bad

Prior to his international trip, Biden didn’t have an interview with the media for over 30 days.

It’s been 33 days since Joe Biden has done an interview.

He has none scheduled.

By doing 1 interview, Vladimir Putin has now done more interviews with the American press in the last month than Joe Biden.

He was VP for 8 years, in the Senate for decades and needs more on the job training in his new role.

So much for hitting the ground running because he needs more time to lead & have a plan! pic.twitter.com/SAj49mWNtb

It’s absurd that Vladimir Putin, a Russian autocrat, has done more interviews with American media organizations in the last month than Joe Biden, the President of the United States.https://t.co/TaIGJ6q041

Joe Biden really answered a question on foreign policy with "I've been in office for 120 days, give me a break. I need to figure it out still."

You're the leader of the free world. You've been in politics for 47 years. The high school late work excuse doesn't cut it anymore.

Joe Biden showed up 2.5 hours late to his “press conference” and this is the best he can do.

Serious question: where are all the activist media talking heads calling for the 25th Amendment to be invoked now, I wonder?

Newsmax reported a Zogby poll found over “60 percent of American voters believe the mainstream media protects President Joe Biden by not asking tough questions, according to a new survey.”

More than 60 percent of American voters believe the mainstream media protects President @JoeBiden by not asking tough questions, according to a new Zogby survey. https://t.co/e6649TNIk6

President Biden ducks the media any chance he gets because he doesn’t want to be faced with tough questions.

Not only does his staff go out of their way to keep the media at arms length, the media doesn’t push back hard enough for answers.

To the extent the media is complaining about a lack of access to Biden in reality they own it. The media went all out to get Biden in office so now they have to deal with the consequences.