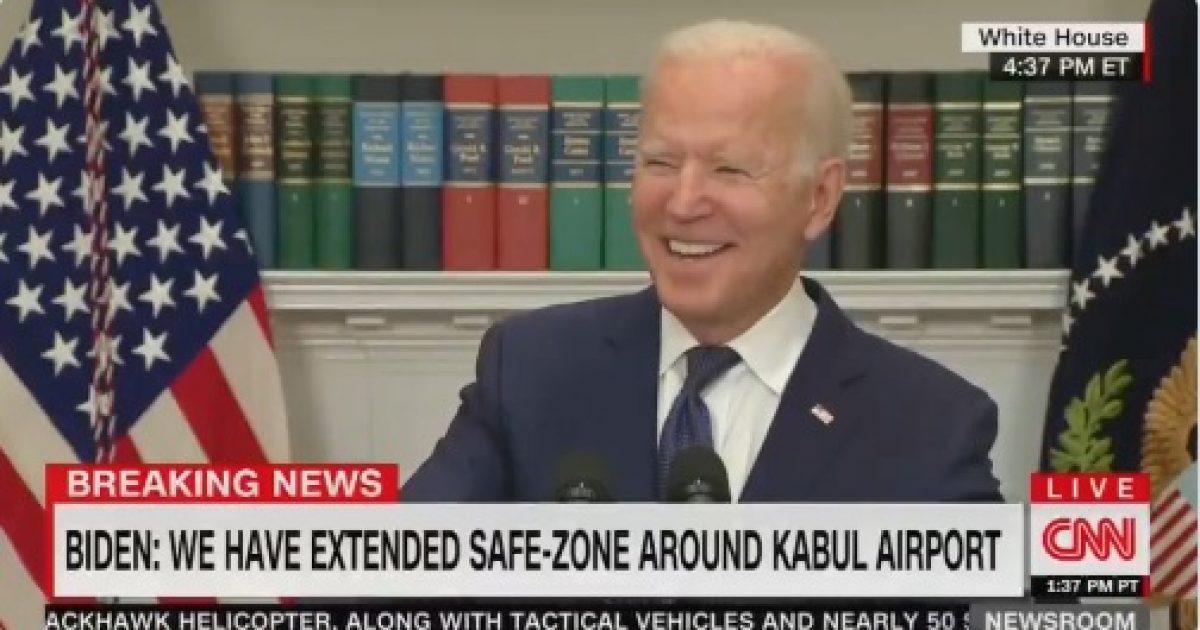 Both President Biden and Vice President Harris laughed at direct questions about the chaotic situation in Afghanistan.

During a press briefing on Sunday, Biden laughed with a big smile following a question about a CBS News poll.

CBS senior White House correspondent Ed O'Keefe confronts Biden with a network poll that finds "a majority of Americans … no longer consider you to be competent, focused, or effective at the job" of being president. Biden claims he hasn't seen it. pic.twitter.com/LtNbvio2Wi

After composing himself Biden said, “Look, I had a basic decision to make.”

Harris also laughed in response to a reporter’s question about the chaos in Afghanistan during her trip to Southeast Asia.

“Hold on, hold on — slow down, everybody!” Harris said, before letting out her now-notorious laugh, shaking her shoulders as she chuckled.

Harris finally composed herself to insist that the Biden administration “couldn’t have a higher priority right now” than Afghanistan.

Here is the video of Harris laughing in response to a question about Afghanistan.

News organizations jumped on the opportunity to report on Biden’s laugh.

The Daily Mail used this headline, “No laughing matter, Joe: Biden chuckles when he’s asked about new poll showing majority of Americans think he’s no longer ‘competent, focused or effective’ after his catastrophic withdrawal from Afghanistan.”

“Look, I had a basic decision to make,” he said at a press conference. “And I decided to end the war.” https://t.co/htDTI2NgWj

The Daily Mail also wrote about Harris’s laugh, “Kamala Harris is filmed LAUGHING at reporter before discussing Afghan crisis and insisting evacuation is ‘highest priority’ after poll called her unfit to be president.”

Clearly, the situation in Afghanistan is no laughing matter.

Over 10,000 Americans are trapped behind enemy lines and they cannot get to the airport in Kabul to exit the country.

The horrible withdrawal plan is getting significant criticism from European allies.

Members of the UK Parliament blasted Biden and the former commander of British troops in Afghanistan said Biden “should be court-martialed.”

Former commander of British troops in Afghanistan, @COLRICHARDKEMP, said President Biden had single-handedly destroyed NATO's credibility and had betrayed the U.S. and the U.S. military, for which he "should be court-martialed." @marklevinshow @FoxNewshttps://t.co/fHEaOllHGa

Biden and Harris failed America and our closest allies with their combined incompetence.

While they can laugh off basic questions, the Americans trapped in Afghanistan remain in a serious and potentially deadly situation.