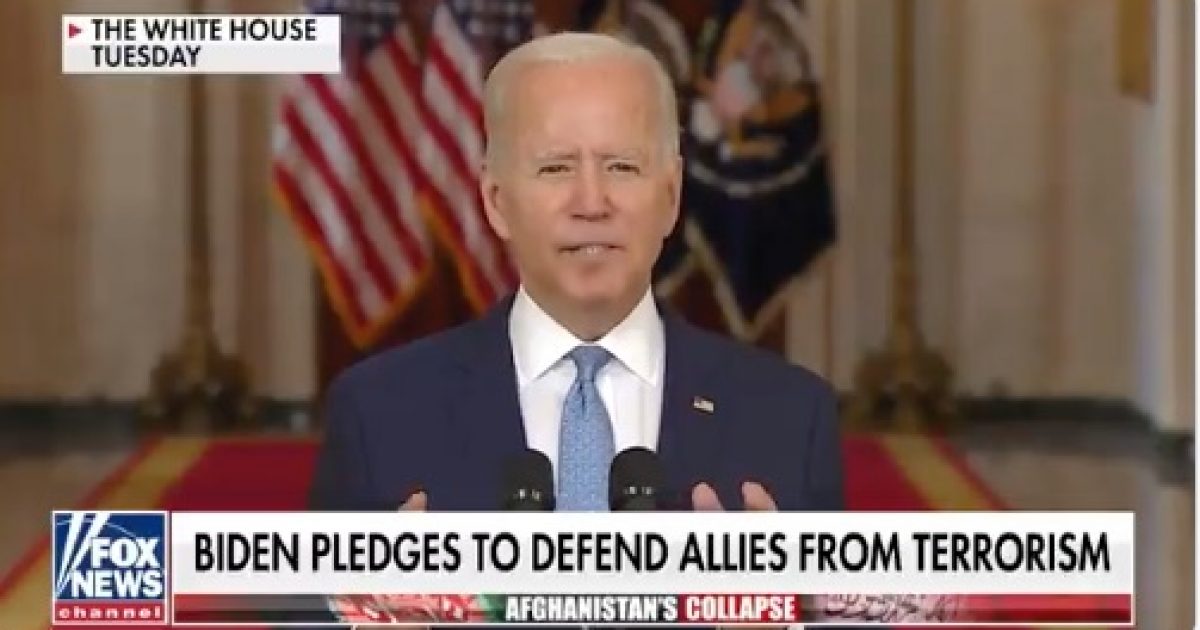 President Biden called the evacuation in Afghanistan an “extraordinary success” during his speech to the nation about the end of the Afghanistan war.

During his address, Biden aggressively defended his decision to end the “forever war,” and touted the evacuation that removed over 120,000 individuals including Americans, Afghans, and allies.

I was not going to extend this forever war. pic.twitter.com/QoDLRA4Hqr

In fact, Biden mentioned the May 1 deadline that Trump set with the Taliban twice in his address.

The president has come under criticism for leaving Americans and allies behind enemy lines and spoke about that issue by claiming 90 percent of Americans got out of Afghanistan.

The bottom line: Ninety percent of Americans in Afghanistan who wanted to leave were able to leave. And for those remaining Americans, there is no deadline. We remain committed to get them out if they want to come out.

Biden was criticized by news outlets including ABC News.

"We keep hearing President Biden blame former President Donald Trump for this absolute debacle of a disaster in Afghanistan and it is not Donald Trump's fault. I would say that if I was an anchor on CNN or MSNBC." @FinnertyUSA https://t.co/VlT7z8drtO pic.twitter.com/pV16dpyvhX

Every veteran who has fought the Taliban is sick to their stomach. They've machine gunned girls' schools & beheaded our Afghan interpreters, including my own.

Now, the Biden Admin is going to hand these thugs leverage in the form of American hostages & int'l recognition. pic.twitter.com/sbUTY1ZjWH

Exclusive—Ryan Zinke: Biden Wants to Distract Us from His Deadly Mistakes in Afghanistan https://t.co/LyRaHfZTnz

Others also weighed in.

“America has left Afghanistan with a Taliban better armed than any of America’s allies”: @DouglasKMurray slams President Biden for calling the evacuation a “success.” pic.twitter.com/xQx1Mu33dO

The results show Biden failed America and the world with his disastrous exit plan from Afghanistan.

Tragically, 13 U.S. military members were killed and a large number of Americans remain behind enemy lines despite Biden’s promise that no one would be left behind.

Additionally, his chaotic exit plan blindsided our allies and Biden left the Taliban a huge arsenal of military equipment.

Biden can spin the results all he wants but his following poll numbers show Americans rate his job performance poor.