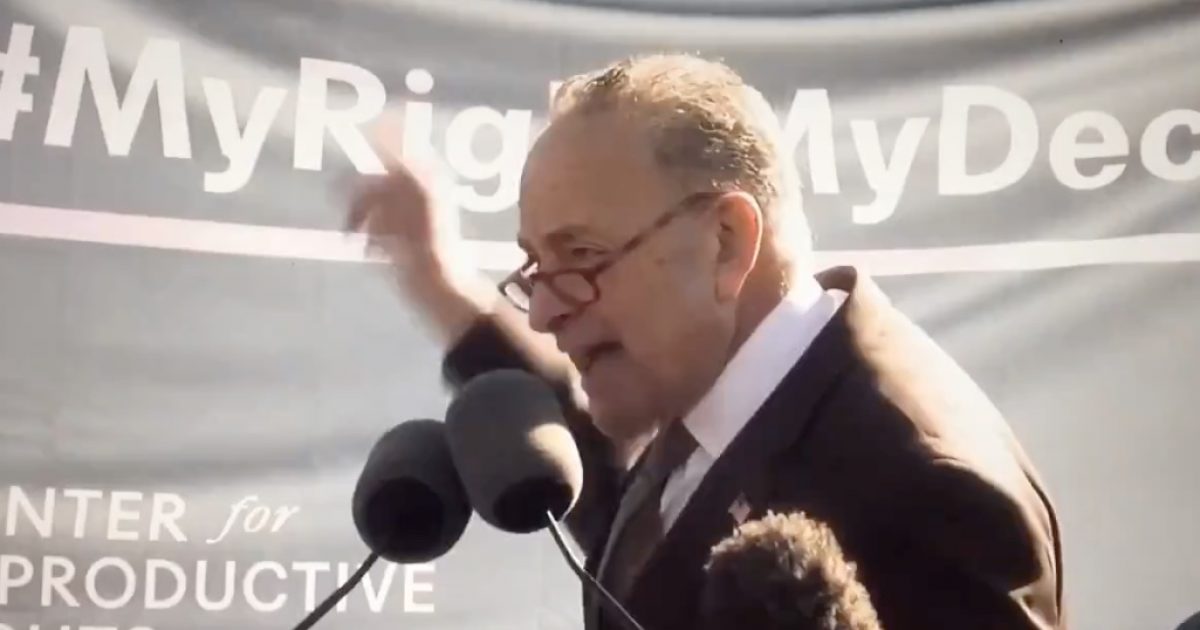 The would-be assassin has sat behind bars for a week, and coverage of his foiled plot to murder Supreme Court Justice Brett Kavanaugh has receded from the headlines as inflation, a shaky stock market, and the Jan. 6 Commission all compete for that space.

The story on the threats to the life of a member of the highest court in the land has increasingly been buried.

But conservatives won’t let the frightening incident recede into voters’ memory banks. They are determined to lay the blame at the feet of Democrats, one prominent Democrat in particular.

“1:00 AM. A man, armed with a pistol, arrives outside the home of a Supreme Court justice. He said he was there to kill,” an unseen narrator says as shadowy stock images play on screen. “Why? Dangerous political brinkmanship.”

The ad then cuts to a clip of Schumer on the steps of the Supreme Court in March of 2020 shouting, “I want to tell you Kavanaugh: You have released the whirlwind, and you will pay the price.” It concludes, “Tell Democrats. Your words. Now a madman with a gun. Stop Threatening Judges.”

Republicans have highlighted such incendiary rhetoric, attempting to draw a connection between careless words and an actual assassination plot. Texas Sen. Ted Cruz, who sits on the Senate Judiciary Committee, shared the clip of Schumer shortly after news broke of the failed plot, calling it “cause and effect.”

Judicial Crisis Network President Carrie Severino has followed suit. “Democrats are trying everything in their intimidation playbook in order to influence the Supreme Court’s rulings and secure their policy preferences,” she told RCP.

Schumer already walked back his “whirlwind” comments. He did so shortly after making them. “I should not have used the words I used yesterday,” he said during a floor speech at the time, stressing that his remarks were political in nature, not personal.

A spokesperson for the Senate Majority Leader told RealClearPolitics that his reaction to the failed assassination plot was relief and gratitude that the gunman was thwarted. “We are thankful law enforcement arrested this person,” the spokesperson said when asked about the whirlwind comments last Thursday. “Leader Schumer’s been clear that he supports peaceful protests.”

Capitol Hill has been consumed of late with debates over political violence. The Jan. 6 commission began presenting its findings on the riots at the U.S. Capitol in prime time last week, while the GOP blasts the Biden White House for not doing more to cool tempers and keep protesters away from the homes of Supreme Court justices. American politics, more and more, can be described as a powder keg.

Conservatives feel that the rhetoric of the left, compounded by what they see as a failure to police their own protestors, has heightened those passions to a dangerous degree. “Their tactics threaten the justices’ safety,” Severino said, “yet Democrats nonetheless unabashedly persevere with their dangerous political brinkmanship, encouraged by the far-left radicals in their party.”
__________