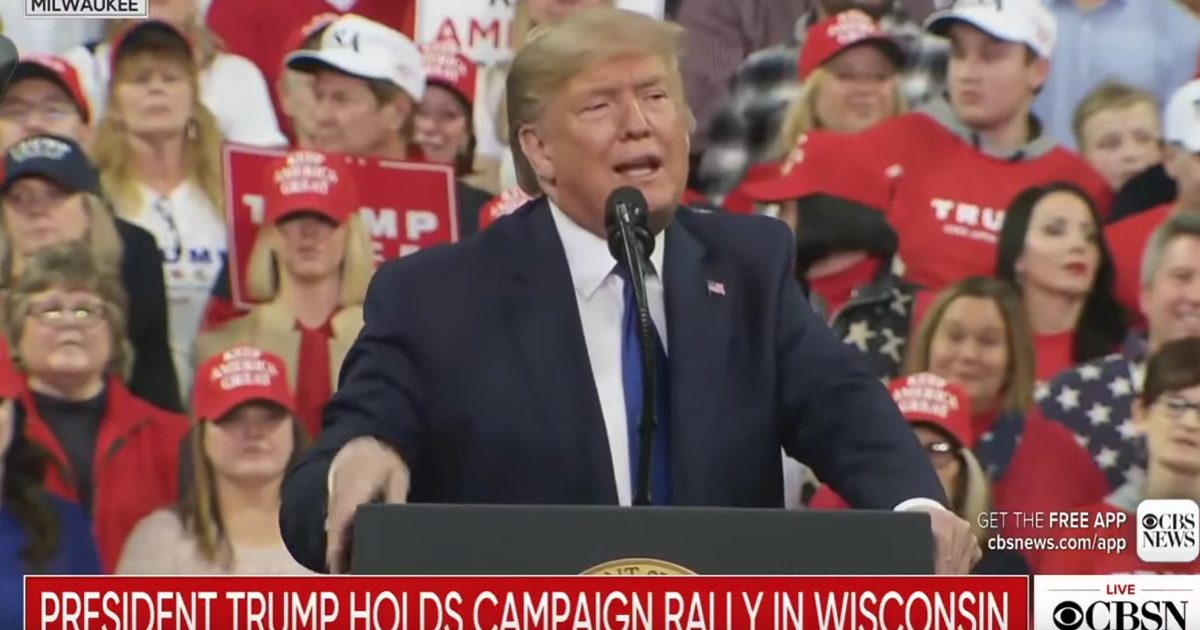 President Trump held a campaign rally in Wisconsin Tuesday evening and promoted the accomplishments of his administration, including a thriving economy, record low unemployment numbers, and the airstrike that killed terrorist leader General Qasem Soleimani.

Last week, missiles were fired at U.S. military bases in Iraq by Iran in response to the airstrike.

Democrats blamed President Trump for the tensions in the Middle East.

In Wisconsin, thousands of attendees waited for hours to gain entry to the rally and the evening was full of applause and chants from the crowd.

President Trump used the opportunity to defend the airstrike and hit back at Democrats’ criticism, saying Soleimani “was a designated terrorist by President Obama” and that “Democrats should be outraged by Soleimani’s evil crimes, not the decision to end his wretched life.”

President Trump called out presidential candidate Vermont Senator Bernie Sanders over his criticism of the airstrike.

Crazy Bernie Sanders (who is surging!) and the rest of the Democrats are outraged that we took out Iranian terrorist Soleimani.

"The Democrats are outraged that we took out this terrorist monster, even though this monster was behind hundreds and hundreds of deaths." pic.twitter.com/5IZHQ8Ad25

At the rally, President Trump highlighted the serious plight of Iranian citizens as a result of Soleimani’s years of terrorism.

“Many of the young men and women you see walking around without arms or without legs were done by Soleimani,” Trump said. “That’s what he loved. He loved the roadside bomb.”

In Iran, protesters have taken to the streets in opposition to the brutal Iranian leadership.

To the leaders of Iran – DO NOT KILL YOUR PROTESTERS. Thousands have already been killed or imprisoned by you, and the World is watching. More importantly, the USA is watching. Turn your internet back on and let reporters roam free! Stop the killing of your great Iranian people!

President Trump also supported the Iranian protesters for showing respect to America by not trampling on a painting of the American Flag in the street.

Wow! The wonderful Iranian protesters refused to step on, or in any way denigrate, our Great American Flag. It was put on the street in order for them to trample it, and they walked around it instead. Big progress!

The videos of Iranian citizens seeking dire change from their brutal leadership shows Democrats are on the wrong side of the Iran debate and are opposing President Trump’s airstrike decision for political purposes.