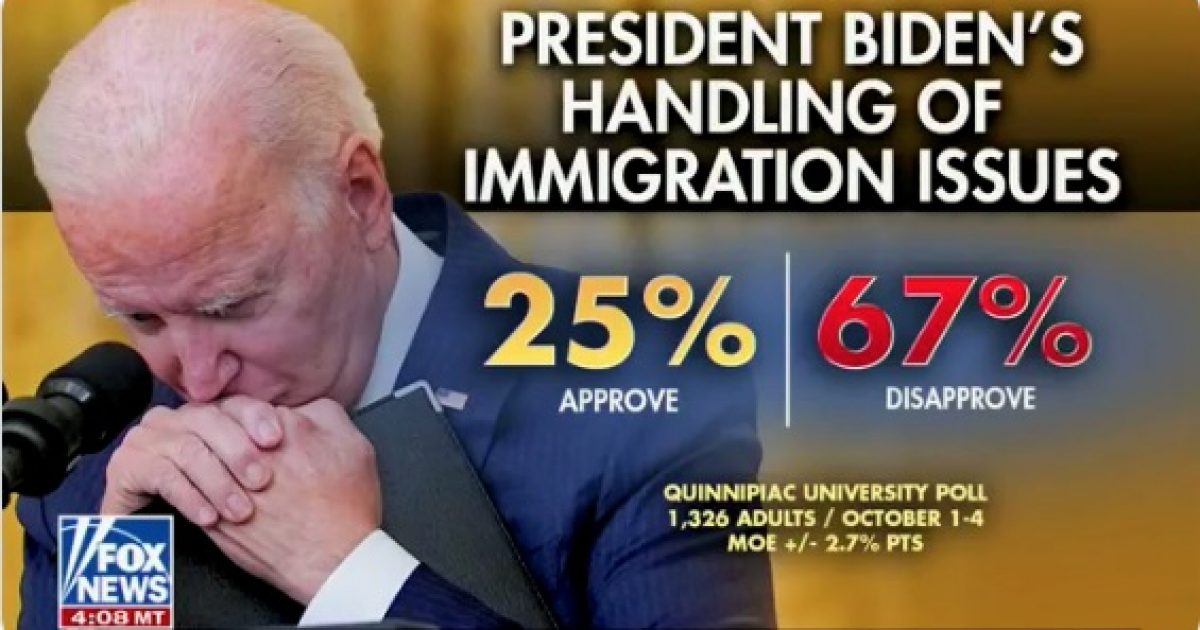 The Biden administration is drowning on issue after issue, and many of the bubbles are coming from the Rio Grande River. The problem, which dare not speak its name, is illegal immigration. The administration, its political party, and the mainstream media refuse to say the very word “illegal.” For a while, they called it “undocumented,” pretending the migrants somehow forgot their papers in the top dresser drawer in Guatemala or Haiti. Now, even that bland phrase is deemed too clear and honest. The new woke term is “irregular immigration.” Anything to minimize the problem, sway public opinion, and avoid plain talk.

The obfuscation goes much further than a few phrases. Consider Secretary of Homeland Security Alejandro Mayorkas’ testimony to Congress last week, where he faced awkward questions about the administration’s decision to stop building the border wall, including portions that had already been contracted and paid for. Mayorkas’ reply, “We are not going to construct a border wall along the ragged and jagged cliffs along certain parts of the border.”

He was addressing a fake issue, answering a question that had not been asked so he could avoid answering the one that actually had been. His misdirection was intentional. Even hardline Republicans agree that a wall is not needed for remote, rugged areas. High-tech solutions work well there and cost less. It’s true that Donald Trump once proposed a wall along the entire border. It’s also true that he abandoned that idea long ago. No one is proposing it now. What Mayorkas was asked was why the administration had stopped building the wall in flat, accessible areas where hundreds of thousands of people have been streaming across. He had no answer. So he spewed more bubbles from a drowning administration.

Mayorkas’ performance illustrates George Orwell’s observations in what is perhaps the best essay ever written about politics and the English language. “In our time,” he asserted, “political speech and writing are largely the defense of the indefensible.” What Orwell wrote in 1946 is still true. Some political acts are “too brutal for most people to face, and … do not square with the professed aims of political parties. Thus political language has to consist largely of euphemism, question-begging and sheer cloudy vagueness.”

Why are the poll numbers so stark? The two most compelling reasons are that illegal border crossings have reached record numbers and the public believes that conditions won’t improve without major policy changes. They’re right. According to official data, first obtained by the Washington Post, “U.S. authorities detained more than 1.7 million migrants along the Mexico border during the 2021 fiscal year that ended in September, and arrests by the Border Patrol soared to the highest levels ever recorded.” In October alone, the Border Patrol apprehended over 160,000 people, more than double the number for the previous year and larger than the population of Syracuse, N.Y. That’s in one month. And they keep coming.

Third, the public fears this surge of illegal migration will harm communities far beyond the Texas border, both because the administration is secretly transferring migrants and because drug cartels are using the open border to transport massive quantities of opioids, heroin, and fake pharmaceuticals. The administration keeps repeating, “The border is closed,” but the cartels, coyotes, and caravans know better.

Fourth, voters can see the Biden administration has no answers. None. Even worse for Democrats, the best answers are those pursued by his predecessor — the ones Biden junked as soon as he took office. The administration cannot restore those policies without admitting error. To do so would say, in effect, that President Trump’s harsh approach worked better. That would be intolerable to the party’s left wing and many in the center.

Instead of proposing practical solutions, the administration floated the quixotic idea of fixing the “root causes of emigration” in Central America and the Caribbean. That’s an elusive goal at best, and, in any case, would not help the U.S. for years. It’s hand waving, not serious policy. Since Kamala Harris was handed responsibility for this latest initiative, it’s tempting to blame her. But the failure is not hers. It’s Biden’s. The White House sent her on a fool’s errand. Washington simply doesn’t have the tools needed to reverse the region’s endemic poverty, danger, and corruption. Nor does it have a track record of solving these problems, despite decades of effort.

It’s hard to imagine the administration could come up with worse policies, but it is trying. The administration’s latest brainchild is to pay massive sums to every family of illegal immigrants separated at the border during the last administration. (They were given the opportunity to return home together but declined.) The idea is so unpopular the White House refuses to defend it at press briefings. So does Mayorkas. All of them say, “Talk to the Department of Justice.” The DoJ’s lips are sealed.

Finally, the public is starting to connect rampant lawlessness on the southern border with rampant lawlessness in American cities. After all, Democrats control both and defend their policies on the same specious grounds: social justice. Criminals find this new terrain inviting. They have dramatically increased shoplifting, carjacking, armed robberies, and murder. Police see the same pattern. When they see mayors refusing to support them and prosecutors refusing to do their jobs, cops on the beat won’t do theirs, either. Why risk your life and career to arrest someone who won’t face serious jail time? Why chase criminals down mean streets when it’s safer to stay in your patrol car?

Voters are troubled by these failures and are deeply unhappy with the officials responsible for them. That’s the message from recent elections in New York City, Buffalo, Minneapolis, Virginia, New Jersey, and now Columbia, S.C., where a Democrat lost the mayoralty only a year after Biden carried the city by 40 points.

The theme here is the same one heard in the movie “Network”: People are “mad as hell and they’re not going to take it anymore.” That’s also the message from the latest poll by YouGov and The Economist, which shows only 27% of Americans think the country is headed in the right direction. Illegal immigration is a big part of that “wrong direction,” along with inflation and COVID.

The public’s frustration is understandable. Citizens, to use another verboten concept, want to see basic laws enforced and social order restored. Those aren’t unreasonable demands; they are the most basic responsibilities of government. Before Washington takes on even more responsibilities and piles on more taxes to pay for them, as Biden proposes with his social-spending bill, they want it to perform the tasks it already has. Law-abiding citizens — whatever their race, whatever their income — want to go about their lives in peace. They want criminals caught and punished so others will be deterred. They want public servants who understand that responsibility and do their jobs.

That’s what Americans are saying in poll after poll, vote after vote. They have soundly rejected candidates who justify the chaos in the name of social justice and racial equity. They want is better policing, without prejudice and without excessive force. They don’t want defunding and dismantling. Their demands are reasonable and realistic. Meeting them is essential for a stable democracy. Politicians ignore them at their peril.

Charles Lipson is the Peter B. Ritzma Professor of Political Science Emeritus at the University of Chicago, where he founded the Program on International Politics, Economics, and Security. He can be reached at charles.lipson@gmail.com.